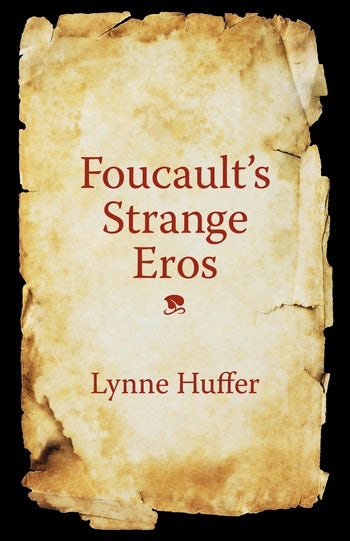 At the heart of this method is a conception of the archive as Sapphic: the past’s remains are, like Sappho’s verses, hole-ridden, scattered, and dissolved by time. Listening for eros across fragmented texts, Huffer stages a series of encounters within an archive of literary and theoretical readings: the eroticization of violence in works by Freud and Eve Kosofsky Sedgwick, the historicity of madness in the Foucault-Derrida debate, the afterlives of Foucault’s antiprison activism, and Monique Wittig’s Sapphic materialism. Through these encounters, Foucault’s Strange Eros conceives of ethics as experiments in living that work poetically to make the present strange. Crafting fragments that dissolve into Sapphic brackets, Huffer performs the ethics she describes in her own practice of experimental writing. Foucault’s Strange Eros hints at the self-hollowing speech of an eros that opens a space for the strange.

ABOUT THE AUTHOR
Lynne Huffer is Samuel Candler Dobbs Professor of Women’s, Gender, and Sexuality Studies at Emory University. She is the author of five books, including Mad for Foucault: Rethinking the Foundations of Queer Theory (Columbia, 2009) and Are the Lips a Grave?: A Queer Feminist on the Ethics of Sex (Columbia, 2013).