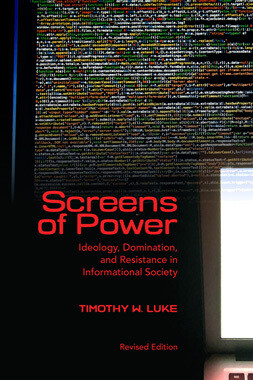 This new edition of Screens of Power: Ideology, Domination, and Resistance in Informational Society, first published in 1989, reintroduces the innovative critique of informational culture, politics, and society outlined by Timothy W. Luke in Telos and other publications during the late 1970s and early 1980s. Working with insights derived from the Frankfurt School, Christopher Lasch, Michel Foucault, Guy Debord, and Jean Baudrillard, Luke maps out decisive conflicts and contradictions that leading modern economies and societies faced during the Cold War. At stake here is how to organize effectively the challenging political, social, and cultural transitions from industrial to informational institutions, practices, and values—a far-reaching transformation that continues to unfold today. The original edition has influenced research in the fields of visual studies, sociology, rhetorical analysis, politics, mass communications, government, information studies, economics, and cultural studies. During the COVID-19 pandemic of the 2020s, far more people are reconfiguring key aspects of their everyday life to flow across billions of screens. As they connect through the signs and systems of application platforms, computer networks, data centers, and software servers, this new edition highlights the significance of Luke’s original explorations of the politics behind informatics as well as Telos‘s ongoing project of developing “a critical theory of the contemporary.”