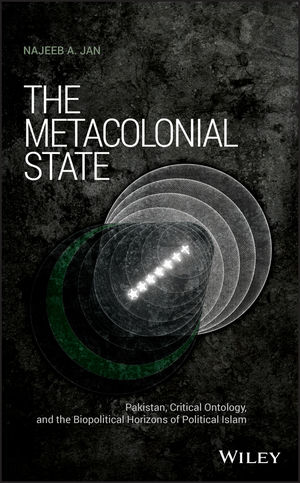 The Metacolonial State presents a novel rethinking of the relationship between Islam and the Political. Key to the text is an original argument regarding the “biopoliticization of Islam” and the imperative need for understanding sovereign power and the state of exception in resolutely ontological terms. Through the formulation of a critical ontology of political violence, The Metacolonial State endeavors to shed new light on the signatures of power undergirding postcolonial life, while situating Pakistan as a paradigmatic site for reflection on the nature of modernity’s precarious present.

The cross-disciplinary approach of Dr. Jan’s work is certain to have broad appeal among geographers, historians, anthropologists, postcolonial theorists, and political scientists, among others. At the same time, his explication of critical ontology – with its radical reading of the interlacement of history, power and the event – promises to add a bold new dimension to social science research on Islamism and biopolitics.

ABOUT THE AUTHOR
NAJEEB A. JAN is Assistant Professor of Human Geography in the Department of Geography of the University of Colorado, Boulder, Colorado.