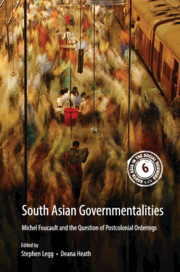 This volume analyses the ways in which the works of one of the most influential philosophers of the twentieth century, Michel Foucault, have been received and re-worked by scholars of South Asia. South Asian Governmentalities surveys the past, present, and future lives of the mutually constitutive disciplinary fields of governmentality – a concept introduced by Foucault himself – and South Asian studies. It aims to chart the intersection of post-structuralism and postcolonialism that has seen the latter Foucault being used to ask new questions in and of South Asia, and the experiences of post-colonies used to tease and test the utility of European philosophy beyond Europe. But it also seeks to contribute to the rich body of work on South Asian governmentalities through a critical engagement with the lecture series delivered by Foucault at the Collège de France from 1971 until his death in 1984, which have now become available in English.