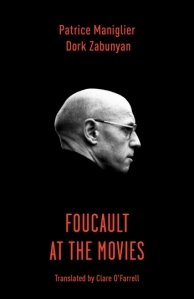 Editor: I am pleased to announce a new book which I translated which will be out in August.

Michel Foucault’s work on film, although not extensive, compellingly illustrates the power of bringing his unique vision to bear on the subject and offers valuable insights into other aspects of his thought. Foucault at the Movies brings together all of Foucault’s commentary on film, some of it available for the first time in English, along with important contemporary analysis and further extensions of this work.

Patrice Maniglier and Dork Zabunyan situate Foucault’s writings on film in the context of the rest of his work as well as within a broad historical and philosophical framework. They detail how Foucault’s work directly or indirectly inspired both film critics and directors in surprising ways and discuss his ideas in relation to significant movements within film theory and practice. The book includes film reviews and discussions by Foucault as well as his interviews with the prestigious film magazine Cahiers du cinéma and other journals. Also included are his dialogues with the noted French feminist writer Hélène Cixous and film directors Werner Schroeter and René Féret. Throughout, Foucault and those he is in conversation with reflect on the relationship of film to history, the body, power and politics, knowledge, sexuality, aesthetics, and institutions of internment. Foucault at the Movies makes all of Foucault’s writings on film available to an English-speaking audience in one volume and offers detailed, up-to-date commentary, inviting us to go to the movies with Foucault.

ABOUT THE AUTHORS
Patrice Maniglier is a senior lecturer in the department of philosophy at the University of Paris–Nanterre.

Dork Zabunyan is professor of film studies at the University of Paris–8.

Clare O’Farrell is a senior lecturer in the Faculty of Education at the Queensland University of Technology. Her books include Foucault: Historian or Philosopher? (1989) and Michel Foucault (2005).