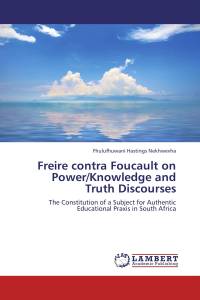 This is a partly theoretical and partly historical study whose ‘focus-down’ approach has as a main objective a detailed comparative dissection of Freire and Foucault’s conceptions of knowledge, power, truth and the subject for authentic educational praxis and the implication these have for the practice of education for liberation in South Africa. The core argument in the study is that despite the existence of some points of convergence between Freire and Foucault’s projects, for instance, the similarity between Freire’s concern for the cultural experience of the learner and Foucault’s view that marginalised local knowledge need to be rescued from subjugation, Foucault’s notion of power does not allow for liberatory education praxis. Only the pedagogy of knowing within the Freirian mould with its emphasis on dialogue and conscientisation makes liberatory praxis in education possible. Hence it is argued in this study that the most suitable framework to illuminate these processes would necessarily combine Giddens and Thompson’s concept of ideology critique and Habermas’ notion of communicative action for purposes of ensuring dialogical action for freedom to take place.