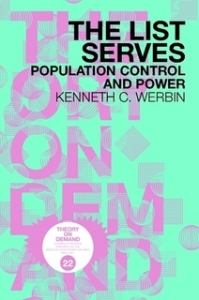 About the book:
Inspired by taxonomist Jack Goody’s theorizing of ‘ancient lists’ as ‘intellectual technologies’, this book analyzes listing practices in modern and contemporary formations of power, and how they operate in the installation and securing of the milieus of circulation that characterize Michel Foucault’s conception of governmentality. Propelling the list’s role in the delimitation and policing of risky and threatening elements from out of history and into a contemporary analysis of power, this work demonstrates how assemblages of computer, statistical, and list technologies first deployed by the Nazi regime continue to resonate significantly in the segmenting and constitution of a critical classification of contemporary homo sapiens: the terrorist class, or homo sacer.

Author: Kenneth C. Werbin is an Associate Professor of Digital Media and Journalism at Wilfrid Laurier University’s Brantford Campus. His research focuses broadly on questions surrounding digital and social media, commodification and surveillance. His work has been published in notable journals including Media Culture and Society, The Canadian Journal of Communication, The International Review of Information Ethics, Fibreculture and The Journal of Canadian Studies. His current Social Sciences and Humanities Research Council of Canada funded research engages digital storytelling methods to raise awareness amongst young adults about digital privacy through the co-creation of a series of 21st-century digital learning materials.